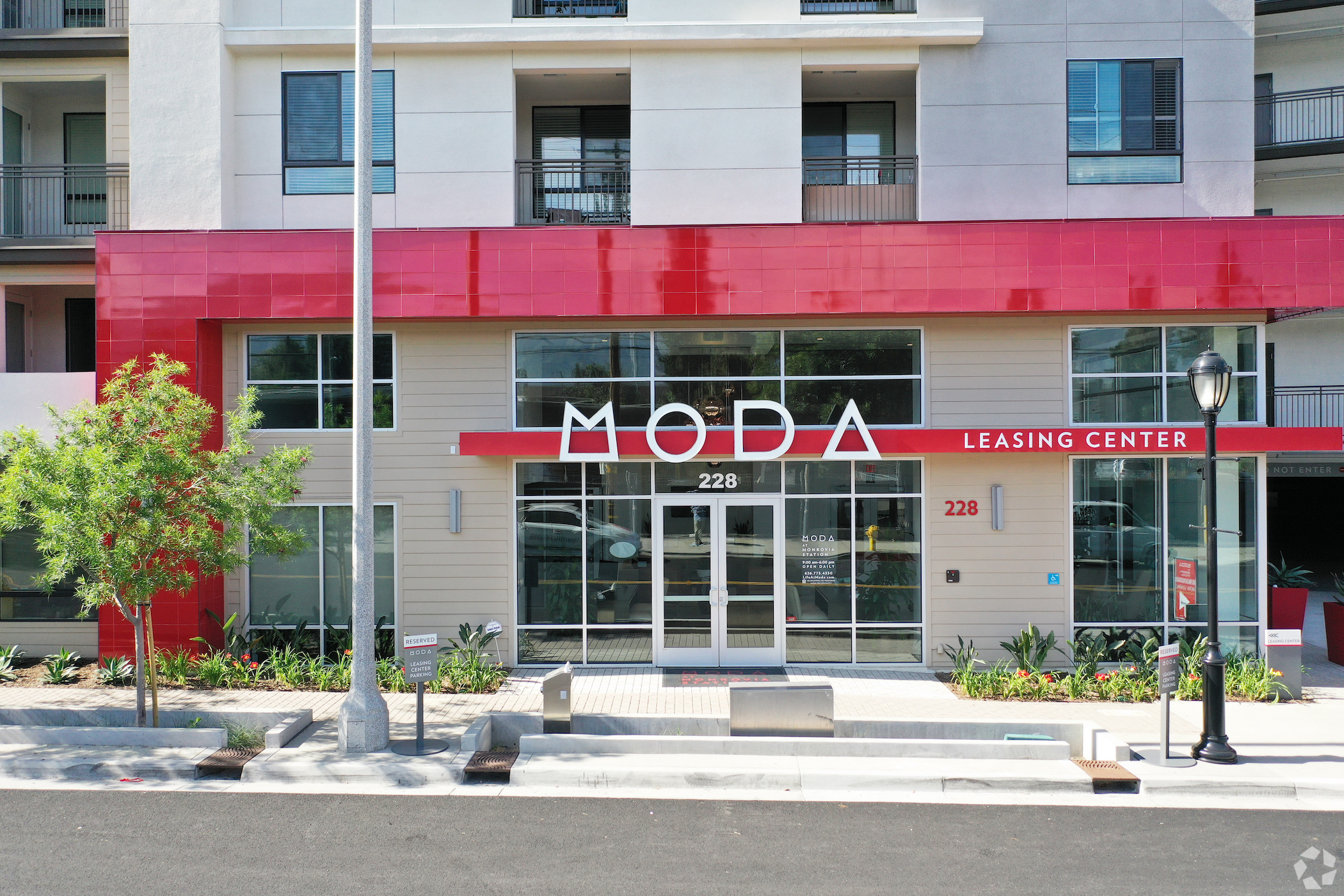 Market-rate apartment complexes such as the MODA at Monrovia Station in Southern California have been acquired by investors to convert to housing for middle-income renters. (CoStar)

More than a third of California’s renters put nearly half of their paychecks toward keeping a roof over their heads.

Yet while the state has for years sought to ease an increasingly severe housing shortage through construction and subsidy programs, rent hikes persist. And some researchers say part of those efforts may have even fed the shortage by limiting overall housing availability in the nation’s most populous state.

California’s struggle to address the growing housing affordability crisis has inadvertently widened the chasm between market-rate developments and affordable options for low-income renters, economists and housing advocates say. As the gap widens, private investors are stepping in to address what is now known as “the missing middle.”

The California Department of Housing and Community Development estimated in 2019 that the state needs to add 1.5 million housing units by 2029 just to meet existing demand. But during the past decade, California has added an average of just 80,000 units annually, well short of the minimum 150,000 needed to meet that long-term target. Against the backdrop of that shortage, market-rate rents have been on the rise, some communities have been resistant to allowing denser zoning and development costs have climbed.

For Lauren Seaver, president of workforce housing provider and real estate investment firm Opportunity Housing Group, the pursuit of more workforce housing has meant securing nearly $1 billion of state-issued bonds over the past year to acquire properties in some of California’s highest-priced apartment regions in a bid to make units affordable for middle-income renters.

Those tenants earn too much to qualify for what has traditionally been known as subsidized housing, geared to people making well below regional median incomes but whose incomes are high enough to make them ineligible for other state-assisted housing programs.

These California workers in fields such as teaching, nursing, social work and law enforcement increasingly struggle to keep up with rent increases that have far outpaced wage gains for the past 20 years. Now government leaders and housing advocates find themselves having to assist households making between 80% and 120% of regional incomes so they can afford rents near their workplaces.

“We started to see the need and lack of ability to address the demand for middle-income housing, which for years has largely been ignored,” Seaver told CoStar News, discussing her firm’s goal of creating more affordable options for tenants such as first responders, teachers, healthcare professionals and other essential workers.

“Very few working professionals can afford to live in high-cost regions such as the Bay Area or Los Angeles,” she said, “yet there are no mechanisms other than programs like ours for providing housing that’s affordable to them.”

Gary Painter, a professor of economics and director of the Sol Price Center for Social Innovation at the University of Southern California in Los Angeles, said the verdict is still out on the long-term effectiveness of middle-income-focused apartment acquisitions on the larger statewide housing problem.

“It should at least serve as a type of proof of concept, where you’re showing you can help some people in this middle-income group,” Painter said. “But it’s still short of addressing what you’re seeing right now with the gap in the affordable supply.”

Throughout the pandemic, a small cohort of investors has emerged with goals similar to those of Opportunity Housing Group.

They include for-profit investment firms such as Catalyst Housing Group in the Bay Area and Southern California’s Waterford Property Co., which have teamed with state authorities to purchase dozens of properties with thousands of units throughout the state. Catalyst Housing, for instance, reports that its purchases have resulted in rent declines that average 10% for middle-income tenants compared to rates charged by previous landlords.

Even so, it hasn’t been enough to offset the roughly 20% average annual rent increases seen statewide as California rebounds from the early effects of the pandemic. “What we’re doing is just a drop in the bucket,” Seaver said.

While California’s housing affordability problem dates back long before the pandemic’s outbreak in 2020, the global health crisis and its economic shocks have highlighted gaps in the state’s approach to addressing the lack of affordable options for middle-income renters.

Among the more active agencies looking to fill the gap has been the California Statewide Communities Development Authority, which teams with private investors and local governments to issue tax-exempt bonds that go toward the acquisition of apartment buildings that are then preserved as affordable housing for middle-wage families for a set time.

Over more than three decades, the authority has issued about $65 billion in tax-exempt bonds for affordable housing acquisitions and other community projects, and 2021 was among the most active years for its workforce housing-focused program, as it financed more than $4.3 billion in apartment purchases in California.

Authority executives acknowledge there are challenges in addressing the growing gap in affordable housing, as its program has so far found feasible acquisitions primarily in suburban areas of larger cities, such as Long Beach, Pasadena, Glendale, Escondido and Santa Rosa. It continues to scout properties to address affordability in cities where rent increases are most pronounced, such as Los Angeles, San Diego and San Francisco.

“We still see opportunities out there, but it could be challenging to keep up the volume of projects that we saw in the past year,” said Jon Penkower, the authority’s managing director.

Some investors note they must be extra vigilant to come up with financially viable transactions. For San Francisco-based real estate investment firm Mosser Capital, that means scouring cities across the state in search of off-market deals involving mostly mom-and-pop owners willing to put their properties up for sale if the price is right.

Those smaller landlords — usually owning properties with 20 units or fewer — make up the bulk of California apartment owners. Mosser CEO Jim Farris said those owners have also been facing challenges during the pandemic when it comes to collecting rents and evicting nonpayers even as they face rising costs to stay in the apartment business. They are also among the most open to selling their apartments.

Mosser also seeks out locations in regions that already have some form of rent-regulation in place, and it has been able to find several properties after some hard searching. The company announced in mid-April that it had acquired 20 workforce-oriented apartment properties with a total of 750 units in cities including Los Angeles, San Francisco and Oakland, in deals totaling approximately $150 million.

In addition to finding willing sellers, buyers aiming to convert projects to workforce housing also face competition from investors looking to get in on the rising tide of rents and property values.

Despite the challenges, Opportunity Housing Group’s Seaver said the group acquires multifamily properties the same way any investor would purchase a typical market-rate complex, often paying at or above regional averages to ensure its competitive edge.

“We look for places with strong demand for more affordable housing options that are surrounded by lots of jobs, good access to those jobs and plenty of growing industries that have historically contributed to the lack of available supply,” she said. “We want the high-quality assets sold by institutional owners, and they’re purchased at market rate.”

Shortly after Opportunity Housing Group acquired the MODA at Monrovia Station in the Los Angeles area for $100 million in May 2021, qualified renters saw their monthly payments cut by about $200 a month, savings that have since escalated to $850 per month.

Going forward, rising interest rates and other escalating operating costs could affect investors’ ability to make middle-income apartment deals profitable. Seaver said low municipal bond rates made it possible to close deals in 2021, but with rising interest rates and tightened financial belts, the investor has had to reduce its initial target of $2 billion of multifamily acquisitions this year.

“We may not see as much buying this year,” she said. “It’s a short-term disruption in the market right now that will hopefully right itself in the next few months. It’s definitely a slower start to the year than we would have expected from 2021.”

Converting the existing supply of apartments to affordable from market-rate units may also have the unintended consequence of exacerbating the problem: In the absence of new units coming online, taking existing stock out of the market could push prices higher for the remaining market-rate units, though long-term data on that aspect is not yet available.

“Anything that takes product off the general market has the potential to lower supply and raise prices,” said Eric Sussman, adjunct professor of real estate at the UCLA Anderson School of Management. “But there is a lot more involved in this if you’re trying to gauge the impact of just one program.”

Not everyone agrees with Sussman.

With California’s housing shortage spread across most income brackets, Stanford University sociology professor Jackelyn Hwang said middle-income conversions’ potential impact on the market-rate multifamily market is minimal given how the lowest-income tenants are already priced out of the state’s housing market and higher-earning renters have fewer concerns about displacement.

“If an investor is converting from market rate to middle-income housing, it would potentially even out the access, at least among the middle- and higher-income groups across various neighborhoods rather than most of the new housing production going only to higher-income residents,” Hwang said.

She added that “it doesn’t solve any issues with most lower-income groups, but without it, they wouldn’t be benefiting from new construction anyway since they’ve long been excluded from the housing market.”

Advocates note these partnerships between private firms such as Opportunity Housing Group and state agencies have already resulted in more than 14,000 multifamily units throughout California being converted for middle-income renters over the past three years.

By the end of the first year following an acquisition, Seaver said at least one-third of a typical property has been converted for qualified middle-income tenants, while the remaining tenant base can stay and continue to pay market-rate prices.

“No one is forced to leave right after we close on a property, but over time through turnover and new vacancies, we fill them with qualified people who can save on their rent,” she said, adding that at one of the firm’s recently acquired properties, renters have been able to get up to an $850 discount off their previous monthly rent payments.

Despite progress, some analysts emphasize that no solution can come close to solving the affordability puzzle for middle-income and other renters if California is unable to get out of its decadeslong rut of severe under-construction of new housing relative to rising demand.

That dearth of construction has been blamed over the years on several factors, including relatively high costs for land, tough state and local environmental regulations that restrict new development and “not in my back yard,” or NIMBY, resistance from residents who don’t want medium- or high-density housing — generally the most feasible for middle-income pricing — to be built near their own homes.

The jury is still out on several California state and city legislative moves of the past three years aimed at giving developers a break from certain density, height, parking and other restrictions in return for building affordable apartments near urban transit hubs and job centers.

“With all this legislation and all these bond-related programs, you’re still just biting around the edges,” said Gary London, principal at development consulting firm London Moeder Advisors in San Diego. “Until you can put up housing where you’re doing more projects with four-digit unit counts, you’re always going to be short of what you need to really make a difference,” he said, referring to complexes that have around 1,000 units.

“The housing deficit is growing every year in California, and it’s all about the supply,” London added. “If you can’t bring some kind of stability to your housing supply, your economic prosperity is imperiled.”

Back to all News